Welcome to Re-flex II by Adaptsys

We design and manufacture On-Demand Carrier Tape solutions, and act as a distributor for some of the world’s leading names in productivity solutions. With offices throughout Europe and a global network of agents, we support customers around the world with an outstanding portfolio of on-site and on-line services.

Re-flex II by Adaptsys is a simple but effective way of producing carrier tape pockets
in-house.  By replacing the high cost of purchasing pre-formed carrier tape with the far less expensive flat tape material that is used by Re-flex II, a Return on Investment can be achieved within one year.

Through challenging other well-known issues of lengthy lead times, expensive shipping and sizeable storage requirements long since associated with existing component packing approaches, this new technology provides carrier tape as and when required which, in turn, guarantees substantial improvements in lead time to market and stock control.

Need to ask us a question?.

What is On-Demand Tape?

On-Demand Tape is a revolutionary concept created by Adaptsys. Rather than holding stock of a wide variety of reels of pre-formed tape, the Re-flex II system allows tape to be embossed as required, thereby simplifying the process, reducing cost and cutting the space required for storage. On-Demand Tape offers the perfect solution for component manufacturers, electronics assembly and kitting houses. Re-flex II uses smart, low-cost tooling to quickly and efficiently create any pocket shape – from basic to complex.

Both standard and custom tooling is available from Adaptsys, although the open approach of the Re-flex II also promotes tool design and manufacture by chosen local suppliers or in-house, minimising lead times and cost.

By integrating the production of tape into the manufacturing process, Re-flex II significantly improves process efficiency. In modern high-mix, low to mid-volume production environments, Re-flex II eliminates the problem of sourcing part reels of products by producing exactly the amount of tape required for the batch/job, thus increasing efficiency, reducing storage space and eliminating wastage with the revolutionary concept of “On-Demand Tape”.

Re-flex II from Adaptsys is the solution for On-Demand Tape. The system enhances the productivity of modern production environments and reduces the need to store bulky pre-formed tape. In addition to efficiently producing standard pockets, Re-flex II can create any custom shape, making it ideal for electromechanical components as well as semiconductors and passive components.

Re-flex II is designed with a minimal footprint of just 960mm x 457mm, this represents a negligible increase in floor area over that required for the use of pocketed tape. As On-Demand Tape eliminates the need to store reels of pre-formed carrier tape, the net result is a considerable reduction in the space used.

Running costs and environmental impact are minimised by the low-power design of Re-flex II. The system requires a single-phase supply and consumes less than 1 kVA when operating. The only other utility required is an 80 psi air line at 10.24 cfm, with no requirement for water cooling.

The compact footprint, low power consumption and simple compressed air requirements not only minimise environmental impact and running costs, but also ensure that the system can be quickly and easily moved around the factory floor. The high quality OEM components that have been used for the Re-flex II  build makes for straight-forward maintenance and servicing, reducing both downtime and costs.

Re-flex II is a highly automated and traceable solution that uses barcodes on both the flat form tape and the tooling to minimise changeover times between jobs and to eliminate operator errors. As well as ensuring that the correct tape and tooling is used, the barcode set up also provides traceability of materials. Re-flex II has been designed for fast, simple changeovers, minimising downtime and reducing operator errors. Reels of unformed tape are much longer than those for pre-formed tape, cutting the number of tape changes by as much as a factor of forty. Using a revolutionary carrier system, together with the barcode setup, the tooling allows operators to change to a new job in less than five minutes, whilst facilitating a fault free set-up.

Statistical process control (SPC) data can be accessed over a local Ethernet network, or from anywhere in the world via the internet. All aspects of the operation and any downtime can be tracked, and causes of downtime – whether due to an upstream stoppage or simply waiting for a tape change – can be analysed, providing key data for use on production process optimisation. 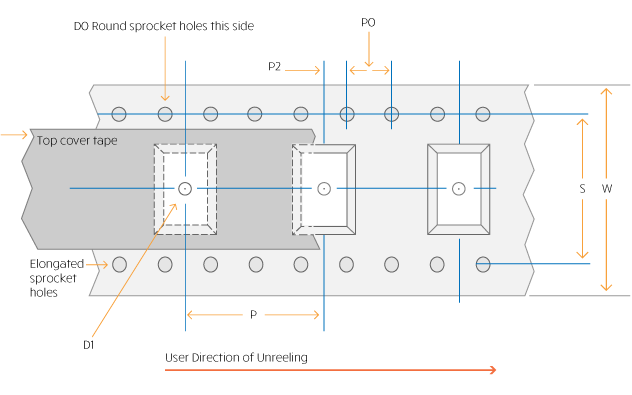 Re-flex II uses pre-punched and pre-slit tape to meet the most demanding of requirements for the most complex tape forming applications. The rotary punch process used to create pre-punched tape ensures the highest accuracy and repeatability and results in a cumulative tolerance of sprocket hole spacing, P0, of ± 0.2mm (± 0.008in) meeting IEC/EIA standards.

By indexing against the sprocket hole the Re-flex II ensures a very accurate P2 position and even pitch spacing (P), enabling reliable operation of pick and place equipment.

Re-flex II allows the use of different tape materials to meet any pocket design characteristics:

Need to ask us a question?.